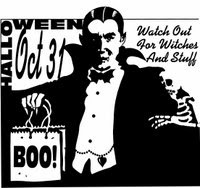 That's right, people. All Hallows Eve, which was once the feast of Samhain, marks the beginning of the so called "Dark Season" when the doors to the supernatural world are opened and all kinds of scary preternatural creatures spill over into our world. This is a excellent excuse for humans of all ages to don a costume...aka, a disguise. Then the vampires and witches will think you're one of them and pass you by, looking for human victims. So dress in scary wear, and be safe!

Thursday - The page proofs for Would-Be Witch arrived. The fonts are so cute that I got misty-eyed. I know...being a tad ridiculous.

Friday morning - worked on creating a brochure for booksellers. It came out really well. Microsoft Word is almost too powerful, you know? I have The Terminator-like fears of the days when the machines take over. It's always the software that you have to be afraid of.

Friday night -worked at the "day" job. It was a long shift.

Saturday later night - Rick and I drove aimlessly...well, we had an aim, but it never seemed to work out except for the brief stint at Empire Cafe. We still managed to have a good time, as always.

Sunday - worked on staying hydrated. Got a fever, and hence had to watch millions of DVDs rather than doing anything ambitious like standing upright.

Monday - Proofread during illness recovery. Page proofs ready to go to New York. The next time I see this manuscript from Penguin, it'll be a real book. Yahoooo!
at October 28, 2008 4 comments:

"I want to be John Cleese, and it took some time to realize that the job was in fact taken." Douglas Adams

I have recently been leaving my gate unlocked because there's been a lot of backyard clean-up since Hurricane Ike and workers have needed to get in and out. So yesterday without any heads-up (pressing the doorbell would have been good to alert me to take a look around before coming downstairs in scanty attire. There are French doors with big glass leading from my living room to my yard.) some men turned up back there.

Anyway, luckily I heard them crunching over leaves and hesitated before wandering by the windows. My initial plan was to treat them like all the creatures who pass through my backyard...if they don't bother me, I don't bother them. This policy has worked with squirrels, birds, raccoons, cats, and possums in the past and I couldn't see why humans should be any different. If anything, people should be smarter and require less supervision than woodland creatures.

But then I notice one of the men walking along the top of the fence. It has no platform and is not designed to be walked on, but I do allow the squirrels to use it as a bridge. Of course, they only weigh two pounds and have claws for traction. Ditto for the cats. This man is wearing boots that are decidedly wider than the fence.

Now fully dressed, I open the door and say, "Hey. What's up?"

"We're from the cable company," the one on the ground responds.

"Do you also have circus training?" I ask.

The one walking along fence clutches a half-broken tree limbs for balance.

"Well, yeah, it's along the ground, but it's easier to pass it along this way. He's fine. We do it all the time."

I quirk a brow. Three quarters of my fence fell down during Hurricane Ike. One of the sections that was recently repaired still has bits of exposed nails. Also, though I'm no structural engineer, I have noticed that the squirrels have been avoiding the un-replaced area, so I've got my doubts about its stability.

The man on the fence wobbles. I know that if he falls and cracks his head, I'll have to help him, but I'm supposed to meet a friend for coffee, so the timing of his concussion would be really inconvenient for me.

"Well, unless you've got trapeze training and insurance, I'd prefer it if you'd stay a little closer to the ground while you're in my yard."

They grumble, but the would-be gymnast hops down.

"Thanks," I say and wave, retreating back into my house.

Fifteen minutes later, I hear a whoomp. I look out. My yard is empty, but I see the non-climber standing in my neighbor's yard trying to look over my neighbor's fence into a different yard.

The non-climber glowers but doesn't answer because, naturally, he doesn't know. "Go around and check. If there's blood or he can't walk or talk, ring my doorbell."

"Don't waste time," I say, waving a hand. My Hippocratic Oath is my business, and there isn't much time before I need to leave. I finish getting ready and gather my stuff. Downstairs, I go first in my yard, but I don't hear any sounds from the surrounding area.

So I walk to the front of the house, and note the would-be gymnast limping to the cable van. There's no blood and he's grimacing, but coherent.

"I didn't fall," he announces.

Sure you didn't, I think. The sky's raining sacks of flour.

I start to pull out of my driveway, but stop. I'm not sure if the cable guys' mission was accomplished. There could be more of them coming...

I hop out and stroll over to the metal gait and lock it. Guys who aren't as nimble--or as smart--as squirrels shouldn't be in my yard without supervision.
at October 17, 2008 6 comments:

"I've wrestled with reality for 35 years, Doctor, and I'm happy to state I finally won out over it." ~ Elwood P. Dowd (Jimmy Stewart) in Harvey

My pal, David, is coming home this weekend from Aruba. Yay! Here's hoping the weather was better at the end of the week, because it rained the first part of the week and he was stuck in the hotel a lot, reading, which, as he pointed out, he could have done in his apartment. Sigh. Would it kill the weather to be a little more cooperative when my best friend's trying to have a beach vacation?

Anyway, after hurricane Ike, he stayed at my place and one of the movies we had fun watching together was Harvey, so the quote above is for him.

Hope everyone else is having a fantastic Sunday! 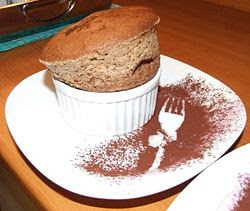 "When I was born I was so surprised I didn't talk for a year and a half." Gracie Allen

Okay, there are parts of the writing gig that I love, that I'm addicted to, that I couldn't live without... and then there are parts that I would gladly trade for more pleasurable experiences like a root canal or a stint in a military prison camp. Yes, I'm talking about re-writing, which is a rather significant part of the writing process.

There are those writers who reportedly prefer revising to writing. When they say that though, I'm pretty sure that they are either (a) lying or (b) insane. Ahem. I am a professional, so I shall cease complaining.

As I get my coffee, I'm going back to polishing Would-Be Witch's sequel, Barely Bewitched, which if I'm pressed I'll admit needs an editing pass--or two. And, by the way, you're unknowingly glad I'm revising because you would have hated that silly souffle metaphor that I deleted from page 87. Honestly, what was I thinking when I wrote it in the first place?

"There cannot be a crisis next week. My schedule is already full." Henry Kissinger
So I'm finally settling back into my normal routine, post-Ike and post-vacation. (I went home last week to Michigan to see my family.) My nephew is utterly adorable, but there are only so many science experiments one can do from a Borders activity kit before one wonders what in the world one was thinking when she bought it for a 6-yr-old in the first place. (Why yes, we were digging through cupboards and closets for things like tin foil and protractors.) Anyway, mini-MacGyver is back in school where I'm pretty sure he's not making rockets from balloons and fishing line. (That's right the teachers leave the hard stuff to the aunts and uncles.) Still that Borders kit may one day make a difference in his life. You never know who'll end up on Survivor. ;)
Have a great week! 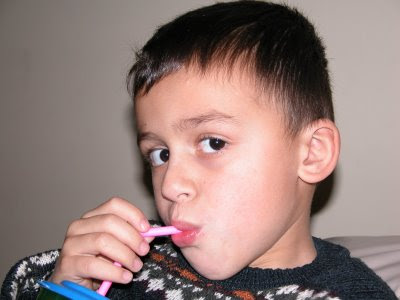