So, I'm doing a little warm-up on the treadmill to clear my head and a commercial comes on between news segments. It's for a documentary on penguins. I watch the penguins walk, dive in the water, swim, bite each other's beaks and generally waddle about. They're cute, I think. Watching them is kind of relaxing. Then the commercial goes back to the ordering screen and highlights a second video. That's right...not just one penguin film. A pair of them. So the first one won't get lonely on the shelf one presumes.

Then I notice it. FOR RUSH DELIVERY...

LOL Hey, I love penguins as much as the next person, but emergency shipping for a penguin documentary? Except for Danny Devito preparing for a Batman movie, who needs that?

If you're the person who needs your penguins RIGHT NOW, please chime in. I want to know about you because you're fascinating to me.
at August 30, 2008 5 comments:

Cooking Up Ideas - Descartes Takes to His Stove 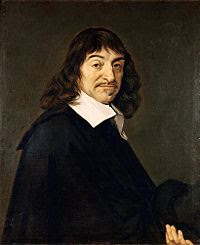 When brainstorming, authors will chase ideas around corners, down dark alleys, and even into sewers. Well, maybe not into sewers, but we'll go pretty far. So, lately I've been reading history and I've got to share some of the fascinating stuff I've come across.

You know how when you have a problem or a goal that you want to accomplish, you'll break it down into parts and tackle each piece? In the case of parents this week, it's scooting the kids back to school. You don't just shove them out the door. You register them for class, buy school supplies, you get their hair cut, you pack them a lunch, etc., etc.

Well, did you know that we got this system from Descartes? He was French. We won't hold that against him because we actually love the French; they invented Paris, gave us the Statue of Liberty, and currently have possession of Brangelina.

Descartes was lying in a huge porcelain stove (a kind of shelf that homeowners laid inside to keep warm) and came up with a system for breaking scientific problems down into component parts to solve them. Later, he would publish a small book on the process suggesting to ordinary people that they could use this system of analysis (Greek for "breaking down") to solve every-day problems. So, there you go; life as we know it explained.

I do wonder what Descartes would've thought of how his system was applied far and wide, in the form of say...psychoanalysis. Do you think he would have found some later uses half-baked? (Okay, silly pun, but I'm up before dawn AGAIN so cut me some slack. ;) )

"The penalty for success is to be bored by the people who used to snub you." -- Nancy Astor

I'm brainstorming new story ideas, so please be on the lookout for my muse. She's about 5'6 and was last seen wearing gold bangle bracelets and cornflower blue slingbacks while in the stands at a relay medley swim meet in Bejing. Please don't mention my plan to chain her to a chair for a few days. Just tell her that there's a house party in Houston with raspberry margaritas. If she's reluctant to leave China, add that it's being held in her honor. Gets her every time. ;)
at August 18, 2008 9 comments:

Wake up, World! Do you know what your author is doing?

So I worked out at 5 a.m. I don't think we can rule out the possibility that I'm INSANE. Ahem. I mean motivated.

Anyway the sunrise was gorgeous and getting the blood pumping does sort of jump-start the day.

Here's a good morning quote for you:

P.S. I was inspired to use a quote from the incomparable Eleanor by a profile quote of a new pal about always believing in your own worth. Now go out and take that world by storm!!
at August 12, 2008 2 comments:

Have you kissed your vampire today?

I have met so many vampire lovers over the past couple of weeks that I feel compelled to share some advice from Dr. Blood, a noted vampire expert...

Vampires are immortal, so chances are that your vamp paramour has seen more than his/her share of history. Be sure to brush up on world history as well as vampire lore. Factoids you may want to drop to impress your vamp...

(a) Honey, did you know that Sherlock Holmes investigated an apparent vampire in "The Adventure of the Sussex Vampire" ?

(b) Sweetheart, of course capes are always in fashion for vampires! Did you know that the trend was popularized on the stage in 1924 by Hamilton Deane?

(c) You'd rather eat cardboard than plain Quaker Oats? I'm not sure that's unique to vampires, sweetheart, but it could have its origins in the long-standing vampire aversion to them that was first noted by the Russians who scattered them on the ground to keep vamps from rising.
at August 11, 2008 2 comments: