ALL THAT FALLS - Release! 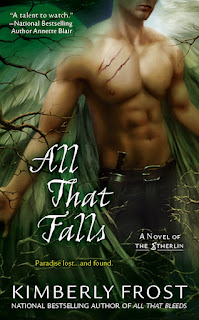 It's been such a long time since I posted. Bad author! Some nice things have happened. ALL THAT BLEEDS, the first novel in the Etherlin series was a Barnes & Noble "Must Read" for its release month. And ATB got some great reviews, the latest from Fresh Fiction which I'll post on the site.

So here we are just six months later, and it's time for the second novel ALL THAT FALLS. I have to say that this book is the sexiest I've written so far. And it's premise was one that really inspired me.


Here's the ALL THAT FALLS back cover blurb...


She should never have touched his blood...

The Etherlin muses have long served as a source of divine inspiration.
Now their world stands between the forces of Heaven and Hell.

As his muse, Cerise propelled her musician boyfriend to the heights of fame, but when he died under mysterious circumstances, her powers vanished. Now cerise is plagued by disturbing half-formed memories of his final night...until she meets Lysander, who seems to hold the key to restoring her memories and abilities.

Fallen archangel Lysander is consumed by his quest for redemption until it leads him to the captivating Cerise. Now his thirst for revenge is rivaled only by his passion for the woman he can't forget.

Bound by blood and stalked by a deadly enemy, will they pay the ultimate price for succumbing to their passion?


As one reader said, "This book has it all. Sex, drugs, and rock & roll. Plus sexy angels, demons, and muses in one action-packed and suspenseful ride. It's Frost at her best."