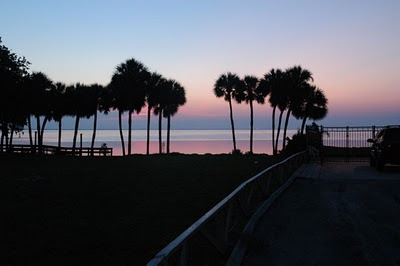 When I left for the airport on Friday, I never expected to start my vacation weekend by eavesdropping on a U.S. Marshall. In my defense, there can't really an expectation of privacy in a crowded airport, can there? Particularly when there are very few open seats at the gate. But if the marshall hadn't been talking about something that interested me, I suppose I would've put in my foam earplugs before I boarded rather than after. A South Florida sting operation, local cops who weren't as tech-savvy as the marshall thought they should have been, a judge who's routinely too lenient, some colorful turns of phrase... fun & fascinating. Probably somebody should warn people with secrets that writers may be lurking in the next seat, but that somebody won't be me. ;)
My friend's jewel of an apartment, which was built in the 1920s, is gorgeous (ghost Edie would definitely approve). The place was decorated so cute, I just wanted to put in my pocket and keep it for myself. I loved the silvery slate blue walls, funky modern chairs, French doors leading into a sun room with a chaise. Also, the place was within walking distance from the Tampa Bay and to a great little collection of shops, including an independent coffee shop named Indigo (love it), where I got quite a bit of work done.
The weather was warm and breezy and not humid at all. The temperature was perfect in the evening for walking to dinner, and the Mojitos in Florida are always refreshing after a stroll. Also, I'm in favor of visiting any city where dinner can come with plantains. Cuban and South American cuisine is great.
One of the highlights of the trip was throwing a party for some cool Florida-based writers on Sunday. My friend decided to make an old family recipe of Sweet & Sour Meatballs, except she wanted to try a gluten-free version that uses rice rather than breadcrumbs to form the meatballs. Unfortunately, even sticky rice isn't as sticky as it needs to be sometimes. Luckily, the party was a great success and the Sweet & Sour Riced Chili was delicious, despite the lack of geometrically-shaped meatstuff.
The fun party prep made me think that I need to host more get-togethers at my place, and I need to be more adventurous when cooking. I'm sure that Tammy Jo would agree that recipes should really just be a jumping off point. Plus, at my house, if the food turns out inedible, I have back-up plan, it's called a wet bar.
Hugs from Houston,
Kimber
P.S. Cool writing news is coming soon. :)
at May 25, 2010

I can't wait for cool writing news! Have a great labor day.

Hey Kimber! Sounds like a great time, I think I'd love a place like that — art deco apts, funky shops, close to the water. I'll have to see if I can get my mom to take me over there next time I'm in St. Pete.

Nice tease. I hope the writing news is as tasty as your food adventures seem to be.

I know, I know. I should have held out 'til I found some gluten-free breadcrumbs. Will keep you posted, re: ongoing adventures, Kimber! :)

On the plus side, your stuffed mushrooms rocked, and my pizza quiches were darn good, if I do say so!

Loved the visit, and thanks so much for the lovely comments, re: my place. It's definitely starting to feel like home. (And is certainly your home away from home any old time.)

So excited for you to reveal your cool writing news to the world!

Funny you should mention gluten-free meatballs...because I have an awesome recipe on my blog (www.zagrebdiaries.blogspot.com) just scroll down the page a bit. I've got celiac, plus problems with dairy, so these are gluten and casein free! Yippee!

The version on the blog are steamed (really healthy that way and no oil mess to clean up). But you can fry them too...just look out because the rice might cause the oil to spatter.

congrats on all the exciting writing news!!!