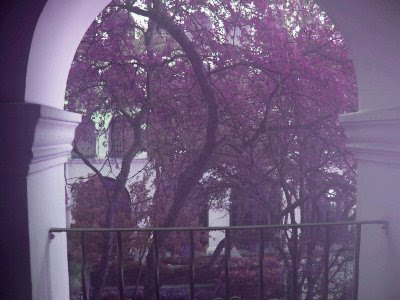 (This slightly surreal photograph is one that I altered to create the
purple effects. I'm posting it in honor of my yesterday's
drive-time adventure.)
Today I'm in Oakmont, Pennsylvania for the Festival of Mystery. (Yay!) It's drizzling, and naturally I didn't pack an umbrella since I had about fifty pounds of bookmarks and brochures. What was I thinking!? Anyway, the drive from the Pittsburgh airport was especially interesting. Like the rest of America, Pittsburgh roadways are under construction, and at one point the orange cones seemed to imply that the expressway ended completely and where it did, we'd be forced to exit.
Since I was armed only with my Mapquest directions, I was not in favor of a detour. Then, as if I was in a CS Lewis novel, the cars in front of me magically continued on the expressway. I really couldn't see how they did it, but I decided that if I had to mow down a few cones, it was better than getting hopelessly lost. Fortunately, it was just an optical illusion. The curve in the road had made it impossible to see that the lane continued. I thought: They really needed a sign a mile back to say that we didn't have to exit. Then, about fifteen feet after the transition, there was a sign that said, "Stay in Lane." Um, thanks. I believe I will?!...(sighing)...Better late than never I suppose.
The silver lining is that the people in Pennsylvania are wonderfully friendly, which makes it a such a pleasure to visit here. Random factoid... I was staying in a hotel just outside of Hershey, Pennsylvania when I began writing Would-Be Witch. Hmm. Tammy Jo's a pastry chef and chocolatier...coincidence?
at May 04, 2009

Oakmont is a GREAT little town! If you need supplies, cross the river and head for Robinson Towne Center - that's where I used to shop because I didn't have to parallel park. :-) The people in Pittsburgh are very friendly, and will never honk at you if you're in the wrong lane (voice of experience here).

If you get the chance, stop in Primanti Brothers for a sandwich - there's one on Steubenville Pike, which isn't too far away.

Thank you! Excellent and helpful advice. :)

I remember the first time I drove through Hershey, PA. The whole town just smelled of chocolate. No wonder it inspired....

Kimber, I'm an idiot. Aspinwall is the town across the river from Oakmont - RTC is near the airport. I shopped in both places (remember, I can't parallel park, which is death in Pittsburgh). There used to be a Caribou Coffee at the end of the Aspinwall shopping center, and a good wine store and supermarket.

Yes, and I remember the streetlights shaped like Hershey's Kisses. So cute.

Are you doing DilloCon this year?

Good to cybersee you! I hope your writing's going well. :)

Pttsburgh was great, but kind of confusing... so many bridges and twisting, hilly roads that changed names. I'm definitely going to need a GPS if I'm going to be exploring new towns all the time.

I did drop into a Caribou Coffee. I haven't seen one of them in quite awhile and always liked them. :)

Kimber-- that's my plan, barring some emergency. Are you teaching the workshop this year, or just attending the con?

Misdirection is the key to good mystery writing. Maybe they just put those cones up for you to feel welcome.

LOL That IS probably the case. :)

I keep checking at Amazon to kindle/preorder book 2 but it just has the link to tell publisher I want to read it on kindle.

Will it be available closer to the date? Does it help to email everyone a person knows to have them click that link

any info is much appreciated, I want to have Tammy on my shelf and portable in my purse lol!

I'm sure that Barely Bewitched will be available on the Kindle when it gets closer. Getting people to click the link certainly couldn't hurt. :)