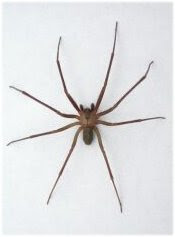 I was away from home last night, and, as there was no reason for me to sleep better at someone else's place than I do at my own, I woke randomly at 3 am. Turning on the light, I apparently disturbed the Brown Recluse spider which had likely sneaked into the apartment in the stack of moving boxes picked up recently from a warehouse.

I was as taken aback at his sudden appearance as he was at mine. He rushed off, every bit as speedy as the car-chasing spiders from the grounds of Hogwart's. Normally, I'm a "live and let live" sort of person, but since Recluses' bites are poisonous to the point of leaving golf-ball sized holes in the previously unblemished flesh of one's person, I did not feel I could ever sleep again knowing he was free to wander within two miles of me.

The spider as I've said had speed and agility on his side. I on the other hand had only fear and my black clog.

Oh, dear! I would have freaked out completely and gone screaming into the night, Kimber. I'm not particularly squeamish about insects/arachnids either, but brown recluses FREAK ME OUT! I WAS actually bitten by a BROWN widow once, which was yucky enough, though mild!

So good to see you!

I think if I'd gone screaming into the night, I would have become a very unpopular house guest. :)

Gads, how funny!! We live in Waco and I'm feeling your fear!!! Stay warm..or should I say cool? It'll be in the 70's here tomorrow! Happy night to you!