For the Love of Leonard 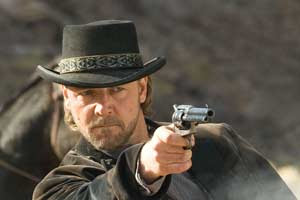 I was quite exhausted when I went to see 3:10 to Yuma. It was a relief that the gunfire was so loud and so frequent since it kept my mind from drifting toward sleep in the dark theatre. Christian Bale was excellent, and Russell Crowe was mesmerizing. Though some moments were far-fetched, the performances made up for them.

The story was written by fellow Motown scribe, Elmore Leonard, who began writing in 1935. Many of his stories have been made into movies, including Out Of Sight, a favorite of mine. Having seen several of Jennifer Lopez's other films, it would be my decided preference that she only work with George Clooney in crime story films adapted from Leonard novels. If she decides to take this advice she will be happy to know that the talented Mr. Leonard, who must be around 110 years old, is still writing.
at September 18, 2007

AND! I finally added you to my blogrolls.

Thanks for the review.

I'm still a young pup at 81. How about sharing some verbs?

I think Russell Crowe is such an outstanding actor. In this case his character was very charismatic, and it takes a star to pull that off well.

Isn't it funny how that goes with some actors/actresses? They might even only have a supporting role, but when they're onscreen, you just can't take your eyes off of them.

I would swap verbs with you anytime. I apologize for adding all those years, but it's to your credit that you've had such an amazingly long career.

When I am next in Detroit, I will look you up. Would love to drop by your mansion to listen to your thoughts on writing. Will bring a large notebook and new pens.

Hugs and kisses back,
Kimberly

Did Elmore Leonard Really visit the same thread as me?

No, I'm pretty sure that the message was one of my friends having a little joke. I doubt that Mr. Leonard spends his free time visiting strangers' blogs, but it was a fun entry wasn't it?

Maybe he'll show up at a book signing and ask you why you never came over.. :-)