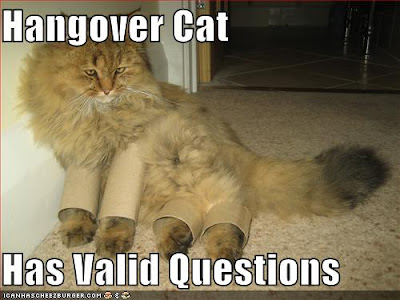 "I like long walks, especially when they are taken by people who annoy me." Fred Allen

I do not have a hangover, but this kitty has an expression that I can relate to after driving around the city today. I think that, by and large, moving cars should short out cell phones. Many people can barely drive or park or think as it is.

Today, I saw a man swerve randomly into someone else's lane as he tried to make a turn without bobbling his cell phone. About 60 seconds later, I was trapped behind someone who for the purposes of this post, we'll call Annoying Idiot With Cell (AIWC). Being mid-conversation, AIWC could not be bothered to take the green arrow's perfectly reasonable suggestion that she make a left turn from a lane that was designed especially for the purpose. So we just sat there. And sat there. Finally, I honked to remind AIWC that the lack of a parking meter was not accidental on the city's part.

Arg! Just because I didn't have anywhere to be, doesn't mean I didn't want to get there in a hurry. I think I may have to buy a big car and hire a driver, so that I can more effectively pretend that the other drivers on the road don't exist. 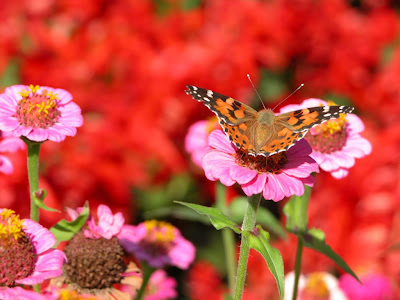 I've worked so long and so hard the past couple days that I just don't think I can form a complete sentence with any wit or even coherency, so it's time to borrow...

"My illness is due to my doctor's insistence that I drink milk, a whitish fluid they force down helpless babies." W. C. Fields

Yesterday, I was telling you about my cover copy for Would-be Witch. And I'm so excited about it that I just can't wait...I have to post the unofficial version. For the back cover:

In the small town of Duvall, Texas, the only thing more troublesome than gossip--is magic.

The family magic seems to have skipped Tammy Jo Trask. All she gets in the way of the supernatural are a few untimely visits from the long dead, smart-mouthed family ghost, Edie. But when her locket--an heirloom that happens to hold Edie's soul--is stolen in the midst of a town-wide crime spree, it's time for Tammy to find her inner witch.

After a few experiences in dysfunctional magic, Tammy turns to the only one who can help; the very rich, and highly magical, Bryn Lyons. He might have all the answers-and a 007 savoir faire to boot-but the locket isn't the only heirloom passed down in Tammy's family. She also inherited a warning...to stay away from anyone named Lyons...
at April 06, 2008 22 comments: 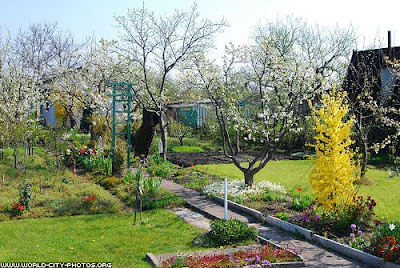 This past week, I got an e-mail from my editor at Berkley asking me to look over the draft of the "cover copy" for Would-be Witch. What is cover copy, some of you might be wondering. Well, it's the text that goes on the front cover, back cover, inside cover, etc.

I printed out the file and was a bit awestruck. Holy cow! This is the cover text for my book! My book is really being published and people wholly unknown to me have read it and are working on turning my unbound pages into something that will be on the shelves and tables of the bookstores that I frequent. It was SO surreal, and better than Xmas, better than my birthday, just plain better than most moments in life.