The 34th annual Dickens on the Strand is this weekend in Galveston. In the 19th century, there was apparently some link between the then richest city in Texas and London (I know, hard to imagine, right?). In any event, when some historic buildings were in danger, this fundraiser festival was born. Now, it's one of the most popular in the country.

My friends, David & John, plan to attend this year. (And my friend, Bethe, and her family usually go every year.) As a result, we had a discussion of, among other things, Dickens' literary works. I'm a fan of David Copperfield and A Tale of Two Cities. David is not as enthusiastic about Dickens' work, owing to having to read some of the more dreary choices when he was in school.

Now if you have a moment, it's time for audience participation. Tell me which book you loved or hated most that you had to read for high school or college.
at November 30, 2007 13 comments:

The guys at the best barbeque place in Houston (Goode Co. BBQ) wear t-shirts that say: "You might give some serious thought to thanking your lucky stars you're in Texas." I'm thankful for that and for some other stuff...

Tonight I'm thanking the night sky and the stars for:

convertibles and wide open spaces, green grass and waterfalls...Penguin Publishing, great books, sweet editors, and characters who enter the world like they own it...Godiva for coming up with a dark chocolate truffle collection, especially the key lime flavor... music by Pink, ballads by Corey Hart, rock star birthdays...and especially all the people ... friends, family, mentors, and icons who make life worth living

What are you thankful for this Thanksgiving?
at November 21, 2007 2 comments:

Ghosts of Studies Past 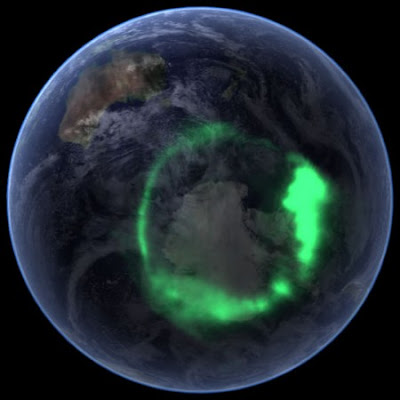 The only trouble with college physics was its computational and conceptual complexity. If not for the math and the mind-bending concepts, it would have been a perfectly lovely subject, like anthropology. I don't recall what other courses I took along with physics, but suffice to say that my second calculus class convinced me that I had studied enough math in my lifetime.
So I gave physics the required attention during the semester, but then the subject was resoundingly neglected.

Imagine my surprise then, when I found that what I know about physics would be important to me as a novelist. It is a bit like opening the fridge and finding a chipmunk snacking on a slice of provolone. One thinks, roughly, "where did that come from?"

I am doing research on astronomy for some books I plan to write. The earth's magnetic fields, the gravitational pull between planets, and a number of other concepts smack of Physics 101. So as I take notes and recall formulas, I think...the university was right; I do need to know this information. All I had to do was become a writer for it to be important again.
at November 15, 2007 5 comments:

Thanks for all the well wishes on the blog and off. I'm fully recovered. For many years I have been lucky enough to possess one of the world's hardest working immune systems, so illnesses never sideline me for long.

Since the body's fever response is actually natural and helpful at fighting infection, I let myself run the temperature for a number of hours on Monday. If I'd had to go to work, I would've loaded myself up with Motrin and pressed on. But, for once, I had the luxury of taking to my bed and having a proper sick day. I watched Horatio, Poirot, the crew of Serenity, and Captain Jack Sparrow. I brainstormed in technicolor and scrawled barely legible notes to myself. It was an okay day despite the odd patch of dizzyness.

Yesterday I was back writing, logging 2,000 new words. (Yahoo...writing days rock!) And today I worked the non-writing job, where all arriving fevers were crushed under an avalanche of pharmaceuticals.

I constantly see little people, that is children, with fevers of 103 who run around playing. So then why am I barely able to get vertical with a temperature of a mere 99.9? Are they mutants?

Anyway, from the land of fevers and chills, I'm happy to report that I'm safely burrowed under the covers watching Horatio Hornblower. Thank goodness that A&E's series are available on DVD.

Wonderful speaker, Sharon Sala, said over the weekend that she dreams all her books. Maybe somewhere in this place of semi-consciousness, I'll find NYT best-selling plot twists...
at November 12, 2007 4 comments:

Tithe by Holly Black. I discovered this when a local bookseller created a new section for teens in the store. While browsing in the nearby stationery stacks, I looked up and this cover caught my eye. It was the first teen book I've bought. (I don't remember there being any teen books when I was teenager. There was certainly no section for it in my local bookstore.) Anyway, I loved this story about modern faeries. The fae in Tithe are just like the teens in the story (and in real life), at times ferocious, at others endearing. They share no resemblance to any fairies that Disney would approve of and are better for it. I loved this book for living up to its considerable promise.

Guilty Pleasures by Laurell K. Hamilton. One of my favorite series. The first books were so original in their style, combining horror with crime fiction. Preternatural forensics? Yes, actually. With Anita Blake as a vampire assassin/necromancer. This is the original that so many other authors have gone on to copy. 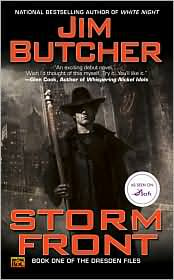 Storm Front by Jim Butcher. "Harry Dresden,Wizard." The words are printed on the door of Harry's place, much to the bafflement of local delivery men. When there are occult crimes in the offing, Harry can be hired to investigate them, and, in Harry, Mr. Butcher's created an enormously likable protagonist. Harry's often an underdog despite considerable skills, and it's fun to watch him battle the universe's evil forces. This series was the basis for a terrific TV series on the Sci Fi channel called The Dresden Files.

I've mentioned Jasper Fforde in other posts, so I would be remiss if I did not include his remarkable and remarkably odd books in this recommendation list. He reports that when his agent was trying to sell the first book, she had difficulty describing the premise and so asked editors to "just read it." I really like that approach. All I'll say is that the main character's name is Thursday Next and people are able to get into books and to kidnap characters right from their pages. If you want to read something wonderfully original, witty, and off-the-wall, I give you The Eyre Affair.
at November 07, 2007 2 comments:

For the romance readers on your Christmas list, I recommend the following titles:

Outlander by Diana Gabaldon. Quite simply one of my favorite books ever. Lush prose, wonderful historical detail, and likely the best loved romantic hero of all time. Ms. Gabaldon originally began writing this as a "practice novel." Made aware of this fact and overcome with artistic jealousy, a writer might hate her... except that she created such a heartbreakingly fantastic story. And so we love her.

Charming the Highlander by Janet Chapman. I enjoyed this story so much for its multi-layered emotional conflict and fun adventure and pacing. (I'm not sure why the beautiful uploaded cover is so small. Forgive me that I have not mastered blogger yet.) It's a contemporary novel set in Maine, where the author lives and has wonderful adventures of her own. Ms. Chapman is prolific and once introduced to her work, I'm sure you'll be delighted to find that there's plenty more to read.

The Protector by Madeline Hunter. Any author who can create an entertaining love story with The Black Death sweeping through Europe as the backdrop has a gift. I first read another terrific novel of Ms. Hunter's and enjoyed her pacing and intrigue. I went back to read all of her work and found she is consistently superb in her writing. She also always has terrific characters and is an automatic buy for me.
at November 04, 2007 3 comments: